Update on Psilocybin Rescheduling in Australia by Prof David Nutt

Update on psilocybin rescheduling in Australia! Back in September, we submitted evidence for the rescheduling of psilocybin to the Therapeutic Goods Administration. However, the TGA decided against rescheduling psilocybin based on ‘evidence’ from traditional bodies, which ignored modern research and even mistakenly claimed that psychedelics are addictive. We appealed and met with the TGA in June for a direct presentation of the evidence. This time, the TGA was much more receptive and are currently reviewing the decision. 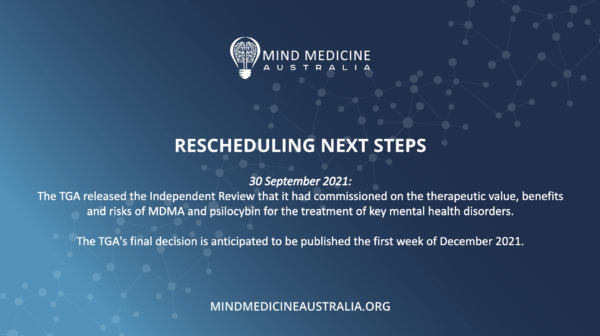 The TGA is considering downgrading MDMA and psilocybin from Schedule 9 of the Poisons Standard to Schedule 8. Doing this will make it much easier for treatment-resistant patients to receive psychedelic therapy. The TGA’s interim decision initially rejected downgrading but after submissions from Mind Medicine Australia and others pointing out the interim decision was based on historical misinformation, it has decided to review the interim decision.

The TGA’s decision to conduct an Independent Review was announced on 7 April 2021.

We are delighted with this development because we have become increasingly concerned about the process to date and the quality of the arguments that were used by the Delegate to justify rejecting our applications at the interim stage.

On 30 September 2021, The TGA announced that the Independent Review has been completed and the Panel’s report can be read here.

The TGA’s final decision is anticipated to be published the first week of December 2021.

“I have personally had three patients commit suicide in the past 5 months. All three patients were fully treated with the best available treatments including antidepressant therapy, psychotherapy, and intensive case management. It is frustrating and heart-breaking to have complete treatment failure in the majority of my patients with the best currently available therapies. I currently have another patient suffering end of life anxiety after a diagnosis of rapidly progressing motor neurone disease. She has requested psilocybin-assisted psychotherapy as she has tried every other available treatment without any relief of her symptoms. The evidence favouring the use of psilocybin to assist with end of life anxiety also appears very promising and there appear to be no side effects.” – Jessica Hickmott, Psychiatrist

“Current first line therapies for post-traumatic stress disorder have limited efficacy, with pharmacological treatments usually requiring costly and potentially side-effect prone daily use. Only 20-30% of PTSD sufferers fully respond to pharmacotherapy. Tragically, many of these patients are former soldiers and emergency responders who have spent their lives serving our nation” – Jesse Schnall, Junior Medical Doctor

”The most complex patients I see engage in regular therapy for years. For many, sub-optimal early life relationships and experiences have resulted in deeply ingrained belief systems which consider the patient to be unlovable, unworthy, and a source of shame. These “self-stories” are embedded within the Default Mode Network, a large-scale brain network which is highly active in rumination and self-criticism, and highly impervious to reason and re-framing. Traditional therapy can be beneficial, however the enormous commitment of time and finances required to begin to “re-story” these belief systems can be a challenge and is often an exclusory factor.” – Caroline Dale, Clinical Psychologist

“Being born Jewish and having lost many of my relatives in the Holocaust, I’ve lived with inter generational trauma for as long as I can remember.  I was never really aware of what exactly was holding me back until I experienced supervised psilocybin treatments in the Netherlands. Since then I have been able to release and heal much of this trauma and also washed away lifetimes of collective trauma that we all carry along with us. I feel a deeper sense of identity, greater insight, compassion and connection. This has helped me to be more authentic and vulnerable in my relationships and has improved my productivity and creativity. It’s like all these missing parts of myself have been found. I am more integrated and much calmer.”
– Tania de Jong AM, co-Founder of Mind Medicine Australia and lived experience

“In my case, conventional treatments over a number of years have resulted in a greatly reduced quality of life and long-term dependence on prescription medication, as well as significant monetary costs and damage to my professional carrier, all without resolving the health conditions that have led to such treatments. Over the last two years I desperately explored alternatives to the conventional treatments and have identified psilocybin as the most promising medication for my condition.” – Terry Catipovski, Patient with lived experience

“I have had my own personal struggle with treatment-resistant depression for over two years and have experienced firsthand the displeasure of trialling twelve currently approved treatments, many of which have worsened my condition in the form of extra pyramidal side effects, kidney damage and cognitive impairment. I can only dream of what my life could have looked like if psilocybin was approved when I was in dire need of life-saving treatment.“ – Dr Nicola Santarossa

“Within in an hour I completely came back into existence. I felt connected again to my body and mind. I was no longer a walking corpse but instead was re-discovering freedom again. It was the experience of being able to see, to smell, to taste and hear the world in the way it should be. The calmness within my soul combined with the electricity of life felt enormous in comprehension. My brain was functioning normally again for the first time in 18 years.” – Jerry Gigez, Patient with lived experience

“I have had severe PTSD for 34 years since the age of 19, following a childhood of physical, emotional and sexual abuse. Over that period I had been treated by 18 therapists, including 3 psychiatrists, and had been hospitalised following a failed suicide attempt.

3 years ago I moved to Amsterdam where I was able to receive MDMA-assisted therapy for PTSD following the MAPS protocol. I had 3 such sessions and experienced a complete cessation of all PTSD symptoms. The psychedelic experiences themselves were the most profound healing experiences of my life and relieved me of the burden of pain, terror and shame I had been carrying.

I am now re-assessing my life from a “post-PTSD” perspective, something I never thought I would see. It has been like giving me a new life. Most PTSD sufferers have not found the healing I have and they deserve to be whole and healed too. The MAPS protocol for the therapeutic use of MDMA has been developed over 30+ years and has consistently shown an 80% cure rate for PTSD.

As a condition, PTSD has extreme therapeutic pessimism; suicide attempts and deaths by suicide are among the highest for this condition of any mental health condition. As a matter of compassion as well as public health policy, Australians who are suffering from PTSD deserve the option to find healing as I did using this medicine that has been shown to be safe and effective for PTSD.” – Steve Ball, Patient with lived experience

“Mental health statistics in Australia and globally support the proposition that current treatments are woefully inadequate. There has been no effective innovation, no effective alternatives developed for many decades in regard to anti-depressants and PTSD. The pharmaceutical industry vacated the innovation space long ago.” – Andrew Robb, Chairman of the Robb Group

Submission to the Delegate of the Secretary of the Commonwealth Department of Health on the Interim Decision (announced on 3rd February 2021) not to amend the Poisons Standard in relation to; Psilocybin.

Submission to the Delegate of the Secretary of the Commonwealth Department of Health on the Interim Decision (announced on 3rd February 2021) not to amend the Poisons Standard in relation to; N, a-Dimethyl-3,4-(methylenedioxy)phenylethylamine (MDMA).

Mind Medicine Australia's application to reschedule Psilocybine from Schedule 9 to Schedule 8 of the Poisons Standard 14 July 2020.